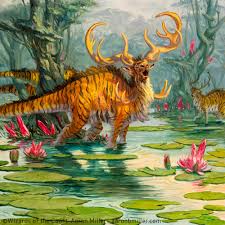 Mutate is arguably one of the more complex abilities to be released in a Standard set. It has a lot of moving parts, and while the basics are pretty intuitive, the way it interacts with things is where the confusion can set in.

So let’s start at the beginning. How does mutate work? All mutate cards currently in print are creature cards. As such, you can cast them as normal and they will act as a normal creature in all respects. However, you could also cast them for their mutate cost. If you do, you will need to target a non-human creature you own (yes own, not just control). When the spell resolves, you will place the newly cast card either on top or on the bottom of the creature you targeted, and which position you place it decides the newly mutated creature’s stats. Your new creature will have the power, toughness, types, mana cost, and name of whichever creature is on top. It will have the abilities (basically everything in the text box) of all the permanents in the mutate pile.

So let’s look at an example. Say you have an Almighty Brushwagg in play and a Trumpeting Gnarr in your hand. You could just pay {1}{g}{u} to play it as a 3/3. It will give you a second creature and advance your board state. However, you may decide you’d like to mutate it instead. In this case, you pay {3}{g/u}{g/u} and target your Brushwagg. From here, you could choose to put the Gnarr below the Brushwagg, making a 1/1 trample with “Whenever this creature mutates, create a 3/3 green Beast creature token.” and “{3}{G}: ~ gets +3/+3 until end of turn.” Not much of an improvement here.

Your other option is to put the Gnarr on top of the Brushwagg. Now you end up with a 3/3 trample with “Whenever this creature mutates, create a 3/3 green Beast creature token.” and “{3}{G}: ~ gets +3/+3 until end of turn.” Much better. (Oh, and in either scenario you end up with a 3/3 green Beast creature token as well. This is a bonus for mutating with a Trumpeting Gnarr.) In both cases, your mutation will be able to attack if the Brushwagg was able to attack (i.e. started the turn under your control). Yay, psuedo-haste!

In nearly all respects for the rest of the game, your new creature acts as if it were a single creature on the field. When it attacks, your opponent your opponent can block it as one creature. If they use removal on it, the whole pile goes to the graveyard. If they attack with a menace creature, you will still need another creature to help out if you want to block with your mutate creature. So on and so forth.

However, as mentioned before there are some unusual interactions that can occur. Lets say your opponent Murders your Brushwagg from the above example with the Gnarr on the stack targeting it. Well, the Murder resolves as normal first, killing the Brushwagg. Your Gnarr no longer has a legal target, so does that mean it is countered due to lack of target? Luckily for you, no it doesn’t! Instead, your Gnarr resolves as if you had spent {1}{g}{u} to cast it. You do lose any mutate bonus (no 3/3 token for you), but you still have a creature. Some consolation at least.

Well, what if they try to Unsummon the mutated creature later? In this case both the Brushwagg and the Gnarr go back to your hand. You could spend the mana recasting and mutating them, or maybe it would be better to mutate the Gnarr onto a different target now. Your choice.

Similarly, if they choose to use Flicker of Fate to temporarily remove your creature, all creatures in the mutate pile are exiled, then returned to the battlefield. When the Gnarr comes back in, however, it comes in as its own creature and cannot mutate anything. After all, you didn’t cast it from your hand for its mutate cost, it is just being returned to the battlefield.

How about some less common (but still possible even in Standard) interactions? What if you use Nissa to animate a land and you later decide to mutate something on to it? Interestingly, no matter what creature you mutate onto the land or in what position, the newly formed creature will always be a 0/0 with 3 (or more if it get’s them elsewhere) +1/+1 counters on it. this is because the animated land has a Characteristic Defining Ability that will override any power/toughness written on the cards.

What if you mutate onto one of the Theros gods and lose devotion? Well, now you have a permanent on the battlefield that is not a creature, and if the mutate creature is on top of the god, it won’t be an enchantment either. In fact, it won’t have any permanent types at all! Yep, just your normal, everyday non-typed permanent hanging out on the battlefield. Oh, it still functions fine (abilities still trigger, if you gain devotion it becomes a creature again, etc.). Just… no types.

Well then, what if you decide you’d like to mutate Gideon Blackblade? Then, on your turn you have a creature with planeswalker abilities. At least, until your turn ends. Then, it matters which card is on top. If Gids is on top, then at end of turn it stops being a creature, as Gids normally does. It does retain all abilities of creatures mutated with it, but many of those will be less relevant once it is not longer a creature (and no, flying on a non-creature planeswalker doesn’t mean it can only be attacked by flyers). It can be attacked by your opponents creatures and will die if it has zero loyalty.

If a creature is on top, then it will remain a creature at end of turn. It will also retain the loyalty abilites, but since the restrictions are built in to the abilities, you can still only activate one of those a turn at a time when you could normally cast a sorcery. To make matters more complicated, if the creature is on top it does not lose loyalty counters from damage or have any adverse affects from have no loyalty. Oh, and by the way, make sure you are able to keep track of which counters are loyalty counters, which counters are +1/+1 counters, and which counters are ability counters from other cards in the set (flying, menace, trample, etc.). Easy, right?

That should about cover most of the interactions you will encounter with mutate. Not all of them of course. Magic, is a complex beast. You should be able to make your way through standard without too much issue though.