Enter: A mysterious visitor from 1,000 years in the past. He arrives in Japan with a story too fantastic to be believed… the end of the world began a millennium ago-and he intends to complete it.

Enter: Mariko, the lovely hero of the clan Yashida, the clan to whom this time-lost warrior once belonged, and the clan from which he now enlists aid to commence the destruction of the Earth.

Enter: Wolverine. Warrior, mutant, hero, and the former betrothed of Mariko. It is to him she turns to warn of this stranger’s mad plans.

Enter: The SIlver Samurai, one of Wolverines most dangerous and hated enemies. Will he side with the stranger, or forge an uneasy alliance with his rival?

In a tale that stretches from the seedy bars of Madripoor to the honor-bound clan houses of Japan to the forgotten city of Tangkor Marat in the jungles of Thailand, Wolverine must race against time itself to stop an ancient threat of unimaginable evil.

Enter: Doombringer. The one who walks between worlds! 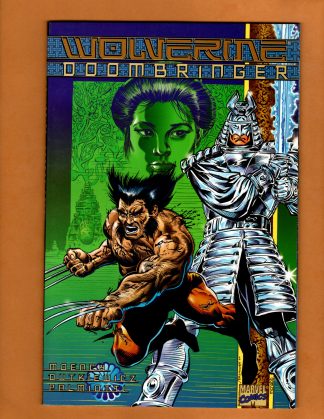