Primordial Power At Your Command!

Sorcerers across Krynn struggle day and night to master the ancient forces that power modern sorcery. Heroes of Sorcery reveals for the first time the advances that have been made in spellcasting since the founding of the Academy of Sorcery. Uncover the secrets to permanent-duration spells, cooperative spellcasting, and combining schools of sorcery. Included in this boxed set are:

One Moon, Not Three. The Fifth-Age sorcerer’s sourcebook contains roles for heroes, in-depth examinations of all the schools of sorcery, rules for the latest spellcasting techniques, and descriptions of the most influential sorcerers active in Ansalon today.

A Killing Frost. In this full-length adventure the heroes must recover a powerful artifact from the legendary Tomb of Huma before it falls into the clutches of Khellendros the Blue. A Killing Frost can be played on its own or as the third chapter of the Dragons of a New Age campaign.

A full-color lavishly illustrated poster map detailing the island of Southern Ergoth and the mysterious Foghaven Vale, including Huma’s Tomb and Dragon Mountain.

This item is opened with  shelf wear and no shrink wrap, but unused. 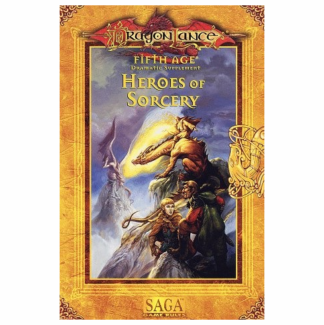