Deep in the tunnels of the underhives of a polluted nightmare industrial world, rival gangs fight for personal power and the honour of their houses.

The Necromunda range of Citadel miniatures captures the horrific world of the Necromunda Underhives in glorious detail, while the contents of this box describe the dark future setting and provide you with exctiting rules you need to recreate these brutal encounters on the tabletop.

Masters of the furnace and of metal, the vat-grown subjects of House Goliath are incredibly strong and tough, if short-lived and mentally unbalanced. The gangers that fight in the name of House Goliath are hulking, muscle-bound brutes and their weapons are as strong, blunt and brutal as they are.

Producers of the finest combat stimulants, poisons and gene-hancing elixirs in the galaxy, the vast majority of House Escher’s subjects are female due to the dabbling in alchemical technologies that has enfeebled its men-folk. The house’s gangers favour the poisoned stiletto knife and choking chem-thrower, and are as fast and agile as they are striking and cruel.

Be the first to review “Necromunda Underhive” Cancel reply 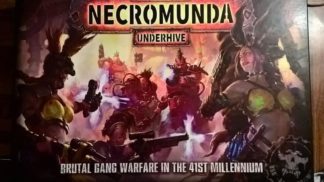