XCOM: The Board Game

The Future of Earth is in Your Hands

Paris is under siege. Millions flee from New York. Alien attacks against Nanjing and Changzhou prompt widespread panic throughout the streets of Shanghai. Defense satellites detect UFOs in orbit over Mexico, Russia, and Brazil. Human civilization stands upon the brink of collapse. To combat this extraterrestrial threat, the governments of the world unite to form an elite paramilitary organization, known as XCOM.

As part of the XCOM defense team, you command the best equipment and soldiers that the world can muster. Destroy UFOs. Research alien technology. Defend your base. Only with the right combination of quick thinking, careful planning, and bold gambles will you succeed against the alien invasion, which is coordinated in real-time by the game’s digital companion app. You are humanity’s last hope.

XCOM: The Board Game is a cooperative game of globabl defense for 1-4 players, based on the award-winning video game XCOM: Enemy Unknown.

Be the first to review “XCOM: The Board Game” Cancel reply 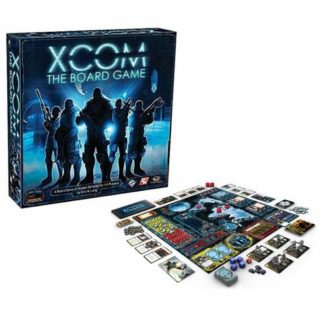