Man Versus Alien in Desperate Battle

From the depths of space, an incredibly ancient vessel drifts slowly towards the Imperium of Mankind. On board this Space Hulk are untold thousands of ferocious alien creatures known as Genestealers. The mighty Space Marines are the only thing that stands between Humanity and this hideous threat. These brave warriors must enter the tomb-like Space Hulk and defeat the alien menace that lies within.

Space Hulk is a game for two players based on the battles fought between the Space Marines and the alien Genestealers. One player commands the Space Marines as they attempt deadly missions in the darkened corridors and rooms of the ancient Space Hulk, and the other commands the horde of Genestealers opposing them. Space Hulk is easy to learn but hard to master, and will provide countless hours of fast and furious action as you play through the sixteen missions that are included with the game.

Be the first to review “Space Hulk” Cancel reply 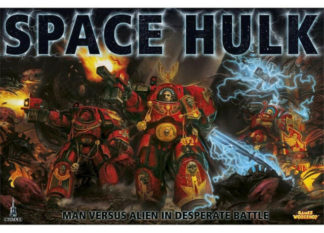