A Game of Storytelling and Imagination for 3-7 Players

Alice was on her way to Dorothy’s Mansion and hoped a place of safety could be established there for all the rebels. She darted through the streets of the town, but a massive figure leaped down from above: Wolf! Luckily, Alice grabbed a discarded frying pan, which she swung against Wolf’s snout with a resounding thump! Could the rebels really create a safe haven in Wintertown?

The regime of winter clutches all in its icy grip, but dangerous revolutionaries devoted to spring still resist. Alice, Dorothy, the Tin Man, and the rebels of spring fight a desperate battle against the forces of Snow White, the Mad Hatter, and the soldiers of winter. The Conflict of Autumn may be over, but there are still new tales to tell.

Winter Tales is a storytelling board game for 3 to 7 players. The players narrate the story of the war between winter and spring, using story cards as springboards for their own imaginations. With each new story, they complete quests and create memories. Each game of Winter Tales is different, because each time the players tell a new shared story.

Be the first to review “Winter Tales” Cancel reply 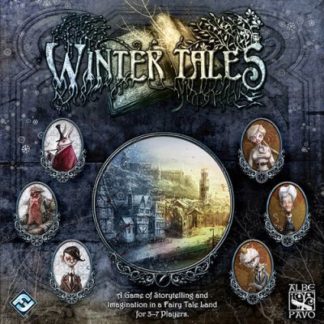