It is a dark and desperate age. For over ten millenia the Imperium of Man has been assailed by its foes, the greatest of which are the dread servants of Chaos Gods. Amongst them are the Chaos Space Marines of the Crimson Slaughter and the cruel Sorcerer Lord Drask, who seek to perform a daemonic ritual to bring about Humanity’s doom. Faced with such a dire threat, the Imperium turns to the agents of the Officio Assassinorum. Rigorously trained, veiled in shadow and steeped in fear, these figures are death incarnate to the Imperium’s enemies.

Assassinorum: Execution Force is a fast-paced cooperative game for one to four players. The players command a team of Imperial Assassins who must infiltrate a defiled sanctum crawling with the servants of Chaos and eliminate Drask before he completes his ritual. To succeed, the players will need to work together and make best use of ther Assassins’ unique and deadly skills.

Be the first to review “Assassinorum: Execution Force” Cancel reply 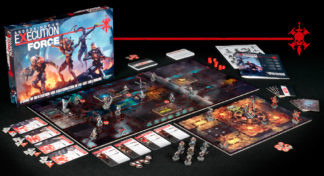