The Horus Heresy: Burning of Prospero

It is an age of war.

Brother fights brother in a hate-fuelled battle to the death.

On glorious Prospero, the psykers of the Thousand Sons face the ultimate censure for their forbidden studies. The Space Wolves are sent to punish them by any means necessary. Fire rains from the skies as their fleet reduces the world of the Thousand Sons to ash. Priceless artefacts and the accumulated wisdom of entire civilisations are put to the torch. But amongst the sea of senseless violence there remains a sancturary. Tizca, city of glass and gold, is protected by a vast force field of telekinetic power. So it is that that the Space Wolves lead an invasion directly to the planet’s surface, their ferocity matched against the warpcraft of the Thousand Sons. They do not come alone. Fighting alongside them are the Sisters of Silence, potent anti-psykers, and the Custodian Guard, the elite blades of the Emperor himself.

The Horus Heresy: Burning of Prospero is a game of running battles set in a city torn apart. The players must choose sides and command a force of finely detailed Citadel Miniatures in a fast-paced brutal war for survival.

Will you master the arcane arts as the magi of the Thousand Sons, and hurl back those who have brought your world to the brink of catastrophe? Or will you play as the alliance of the Emperor’s executioners, purging the recidivist warrior-mystics of Prospero with flame and blade? Find out in this thrilling, quick-fire game of war, tactics and sorcery.

Be the first to review “The Horus Heresy: Burning of Prospero” Cancel reply 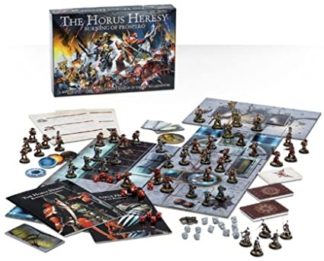 You're viewing: The Horus Heresy: Burning of Prospero $400.00
Add to cart