The Story So Far

“You’re goin’ to be famous, baby!” Max Bialer blares over the phone. “Monumental Pictures is backing this all the way. Marion Chapel herself directed this flick, and they’ve pulled a bottle off Gene Sonnet long enough to finish principal photography with him in the lead. Margo Sullivan’s put up with him too… they couldn’t keep her away from the script! And Harvey Ensher’s ran with the part that Karloff could do.”

You listen to the jabbering idiot through the earpiece, wondering when this self-proclaimed “Agent to the Stars” will stop beating his gums.

“Now the whole plot is about you, right? You and those Palooks you run with,” Max presses on. “They built the whole megillah out of those whoppers from the Miskatonic Courier rag in Arkham. They dropped a ton of dough on this flick, bought out a lot of those artifacts from some of those estates that got your name in the papers. They even used photographs of you to model the costumes.

“What? No, I ain’t been on the sauce! The movie’s all finished and they’re holding a big premiere at Marion’s place. It’s an estate called Whale Manor. They’re holding a big screening for the studio bosses and stars from Hollywood, and really putting on the feedbag for everyone.

“No, they want the real McCoy, see? You go up there wearing the same getup you had when you did your voodoo ghost trapper bit, put up with their hooey, pick out a flapper, and have a night of it!

“What’s the movie about? Who cares?! It’s called ‘House of Fears,’ but what difference does it make? Don’t be a sap!

“Hey, now you’re on the trolley! Do us a favor and walk in at ten for the publicity boys. They want to snap a few pics before they roll the film.

“Be seein’ ya in the picutres, babe!”

Requires Mansion of Madness to play

Be the first to review “House of Fears Expansion” Cancel reply 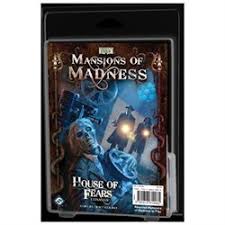 You're viewing: House of Fears Expansion $19.95
Add to cart